Bitcoin’s uptrend continues with prices rising over 10% this month, extending October’s 40% gain and setting a new record high of over $68,000. However, institutions and large investors seem to be handing the baton over to retail investors ahead of the U.S. consumer price index data that could influence the Fed rate hike expectations.

While the coin stash of small bitcoin addresses continues to rise, the combined balance of addresses holding 100 – 10,000 BTC has dropped by 60,000 BTC ($4 billion) in the past seven days, diverging from bitcoin’s continued price rally, data tracked by blockchain analytics firm Santiment shows.

“The fact that some BTC whales [large investors] may be unconvinced of the rally (at least based on non-specific address distribution) remains a yellow flag for the time being, especially given the largely upward slope of their holdings between the start of the May correction and the end of October,” Santiment said in a weekly note shared with CoinDesk early today.

Balance held by addresses holding more than 10,000 BTC has increased. However, most of these belong to crypto exchanges, Santiment noted.

The amount of money locked in bitcoin futures contracts listed on the CME has dropped to $4.6 billion, marking a 22% drawdown from the Oct. 25 peak of $5.5 billion, per data provided by Skew.

According to Arcane Research, the number of open contracts on CME, when excluding the BITO contracts, is down 45% since its Oct 25 peak. The ProShares bitcoin exchange-traded fund (ETF) launched on Oct. 18 on the New York Stock Exchange under the ticker BITO invests in regulated CME-based bitcoin futures in a bid to mimic the cryptocurrency’s performance.

The decline in open interest on the CME suggests that institutional traders are less active in the market now compared to late October, Arcane Research’s weekly note published Tuesday said.

The CME-based futures, particularly the regular ones with a contract size of 5 BTC, are considered a proxy for institutional activity. Open interest on the CME surged by 185% in October on speculation about an imminent futures-based ETF. 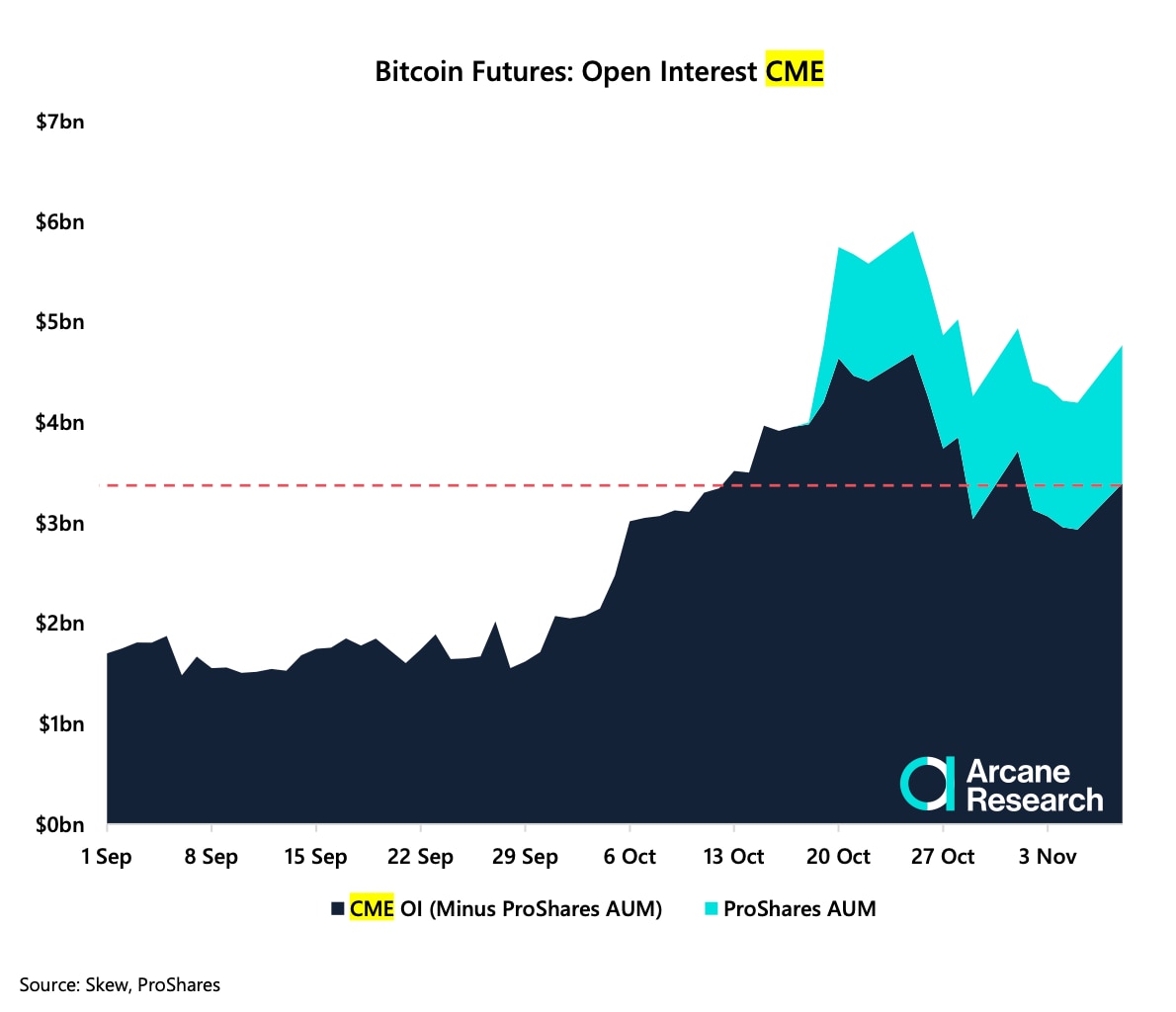 Bitcoin futures open interest on Binance, the world’s largest cryptocurrency retail exchange, has increased by 16% to a record high of $6.6 billion in the past two weeks.

With large traders taking a backseat to retail investors, bitcoin’s bullish momentum may slow. The cryptocurrency was last seen trading largely unchanged on the day near $66,900, having dipped by 0.9% on Tuesday.

Bitcoin is widely perceived as a store of value asset and may pick up a strong bid if the U.S. inflation data scheduled for release at 13:30 UTC bolsters fears of price pressures moving out of control.

“Consensus is looking at a jump from 5.4% to 5.9% in the headline rate, with core expected to advance from 4.0% to 4.3%,” ING analysts said in a blog post published early Wednesday. “Inflation at 6% is set to offer more ground to the Fed’s hawkish members to keep raising concerns about the risks of acting too late or doing too little on monetary tightening.”

Readers, however, should note that a bullish move in bitcoin may remain elusive if the higher inflation number revives fears of faster interest rate hikes by the Fed, sending the dollar, short-duration bond yields higher and equity markets lower. The S&P 500 futures were pointing to mild risk aversion at press time with a 0.3% drop.

“Today, we think the risks are skewed towards a positive reaction by the dollar, as slightly below-consensus numbers (but still higher than last month) should not be enough to cause any dovish re-pricing in rate expectations – which are already less hawkish than the Fed’s median Dot Plot [interest rate projections] – while a close-to or above 6% read could prompt markets to bring forward the pricing for the start of the Fed’s” ING said, adding that the dollar index, or DXY, may rise back towards Friday’s 94.60 by the end of this week.

While the Fed announced the beginning of the gradual unwinding of liquidity-boosting bond purchases last week, it stuck to its view of inflation being transitory, calming fears of an early interest rate hike. Fed’s record money printing program running since March 2020 has inspired investors to buy bitcoin and just about every asset denominated in dollars. As such, monetary tightening poses risks to asset prices.